What is web scraping?

Ethical Web Scraping is the act of harvesting data legally by following ethical rules about web scraping. There are certain rules in ethical web scraping that when followed ensure trust between the website owner and web scraper.

In Python, a learner can write a small piece of code to do large tasks. Since web scraping is used to save time, a small code written in Python can save a lot of time. Also, Python is simple and easy to understand and provides an extensive set of libraries for web scraping and further manipulation required on extracted data.

Individuals who are new to web scraping and wish to flourish in their field usually lack the necessary computing and learning resources to obtain hands-on expertise. Also, they may face compatibility issues when installing libraries.

With just a single click, Jupyter Hub for Ethical Web Scraping using Python comes with pre-installed Web Scraping python libraries, which gives the learner an effortless coding environment in the Azure cloud and reduces the burden of installation. Moreover, this offer provides the learner with a repository of the famous book on web scraping which contains chapter-wise notebooks which serve as a learning resource for a user in gaining hands-on experience with web scraping.

Through this offer, a learner can collect data from various sources legally by following the best practices for ethical web scraping mentioned in the latter section of this blog. Once the data is collected, it can be further analyzed to get valuable insights into almost everything while all the heavy computations are performed on Microsoft Azure hence saving the user from the trouble of running high computations on the local machine.

Listed below are the pre-installed web scraping python libraries and the sources of repositories of web scraping book provided by this offer:

Globally, there is a debate about whether web scraping is an ethical concept or not. The reason it is unethical is that when a website is queried repeatedly by the same user (in this case bot), too many requests land on the server simultaneously and all resources of the server may be consumed in generating responses for each request, preventing it from responding to other legitimate users.

In this way, the server denies responses to any further users, commonly known as a Denial of Service (DoS) attack.

Below are the best practices for ethical web scraping, and compliance with these will allow a web scraper to work ethically.

Robots.txt file, also known as the Robots Exclusion Standard, is used to inform the web scrapers if the website can be crawled or not, if yes then how to index the website. A legitimate web scraper is expected to respect the instructions in this file and not disobey the website owner’s allowed instructions.

An ethical web scraper is expected to first look for the public API of the website in question instead of scraping it all together. Many website owners provide public API access which can be used by anyone looking to gain from the information available on the website. Provision of public API works in the best interests of both the ethical scrapper as well as the website owner, avoiding web scraping altogether.

Vigorous scraping can occasionally cause functionality issues, resulting in a poor user experience for humans. As a result, it is always advised to scrape during off-peak hours. An ethical web scraper is expected to delay recurrent requests to avoid a DoS attack.

It is always a good idea to take responsibility for one’s actions. An ethical web scraper never hides his or her identity and provides it in a user-agent string. Not only does this make the intentions of the scraper clear but also provides a means of contact for any questions or concerns of the website owner.

The content scraped through web scraper should always be respected and never passed on under the fake information of scraper as the author. This act can be regarded as highly unethical as well as illegal since the website owner may file a copyright claim. It also damages the reputation of genuine web scrapers and hurts the trust of the website owner.

Since the website information belongs to the owner, one should never presume it to be free and ask politely to use it for their means. An ethical web scraper always seeks permission from the website owner to avoid any future problems. The website owner should be given the choice of whether she agrees to scrape the data.

To encourage the website owner as a token of thanks, the web scraper should give due credit wherever possible. This can be done in many ways such as providing a link to the original website on any blog, article, or social media post by generating traffic for the original website. 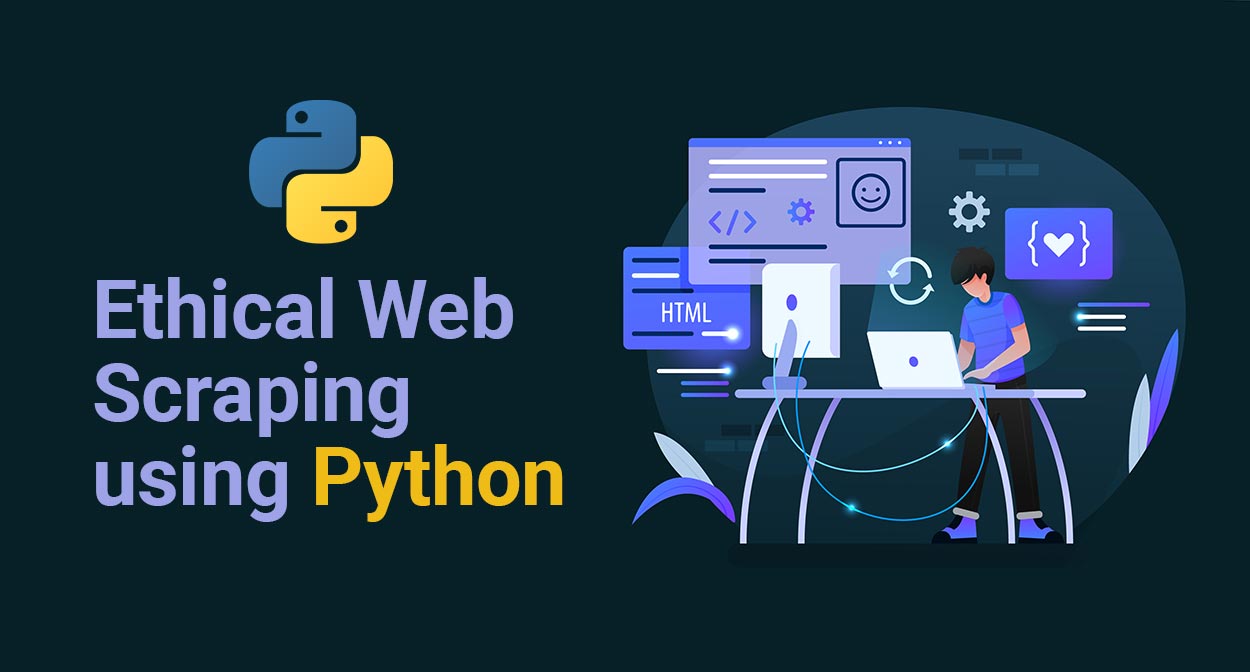 Ethical web scraping is a two-way street in which the website owner should be mindful of the global availability of the data, similarly, the scraper should not harm the website in any way and also first seek permission from the website owner. If a web scraper abides by the above-mentioned practices, I.e., he/she works ethically, the web owner may not only allow scraping his or her website but also provide helpful means to the scraper in the form of Meta data or a public API.

At Data Science Dojo, we deliver data science education, consulting, and technical services to increase the power of data. We are therefore adding a free Jupyter Notebook Environment dedicated specifically for Ethical Web Scraping using Python. Install the Jupyter Hub offer now from the Azure Marketplace by Data Science Dojo, your ideal companion in your journey to learn data science! Ayesha Saleem
Secrets to social media algorithms – All you need to...